Last week I was testing buttercreams, and this week I got to put them to use. The base was a chocolate beer cake, made with a local micro-brew porter, which gave the cake a subtle coffee flavour.

I was making a garden cake and wanted to use only natural colourings in the decoration. I needed green for the grass, so used spinach juice to colour the icing (using the Ermine frosting recipe). The recipe called for one cup of whole milk, so I used 3/4 cup of milk and 1/4 cup spinach juice. It was a fairly pale shade of green, but looked much better, in my mind, than most chemical colours.

I made little vegetables out of marzipan to plant on top of the cake, and for those I used blackberry and blueberry juice (beets), carrot juice (carrots), turmeric (yellow zucchini) and spinach juice (lettuce and leaves). I also added a sprig of fresh parsley to the top of the carrots and a sprig of fresh oregano to the beets for the greens of each.

Colouring the marzipan was a bit of a challenge, because you need a thick consistency in order to blend it in well, and juices are not thick! I added a bit of tapioca starch to each and heated them to thicken, and then was able to blend them in quite easily.

I did use a couple of candies (pumpkins and strawberries) which would not qualify as natural, but the majority of the cake was. It was a fun project to work on. I was glad to be able to experiment more with the natural colourings, and to have had such success with them. 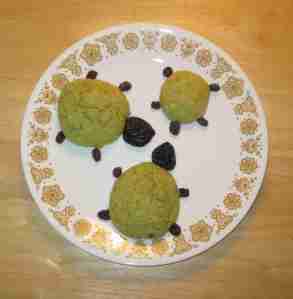 My daughter turned one this weekend. I love making and decorating birthday cakes, but I didn’t want to go overboard on the sugar, since she’s been primarily eating fresh whole foods so far. There will be plenty of sugar in the years to come, I’m sure, so I didn’t feel guilty about this. But I thought we should have something fun to celebrate this special day. Before she was born we had been calling her Turtle, partly because we couldn’t agree on a name, and partly because that’s what she looked like to us in the first ultrasound pictures! So I decided to try and make some turtle cookies to celebrate our Turtle’s big number one. A friend of mine had sent me a link a couple months ago to a blog post about natural food dyes. I looked it up again and decided I would try to make the turtle cookies green, naturally. END_OF_DOCUMENT_TOKEN_TO_BE_REPLACED

Like Loading...
Sharing thoughts on baking related experiences. See the top menu for galleries of my baking endeavours.