Like many people, I grew up thinking that bannock was a Native American tradition, but I recently learned that it is actually of Scottish origin. All those years at the campfire roasting it on a stick, and it’s really supposed to be baked as a round loaf and cut into wedges like scones. But that doesn’t mean it can’t still be a fun thing to cook over an open fire. So this past weekend when I went to the beach with my family to have a hotdog roast over a fire I decided to whip up a batch of bannock dough and take it along. I added some cinnamon and vanilla to the dough to make it more like a dessert.

The thing with roasting it on a stick is that it tends to burn on the outside and still be gooey in the middle. It seemed to work best when I held it in one spot as close to the embers as possible for a brief amount of time, then rotated it a bit and held it for another short time, and so on until it was fairly dark brown all around. It still ended up being a bit gooey in the middle, but not nearly as bad as the first time I had made it!

It is also helpful to use a stick with two points. If you just put it onto the end of a single point stick the dough tends to sag and you risk losing it in the fire. With two prongs there’s more onto which the dough can cling. 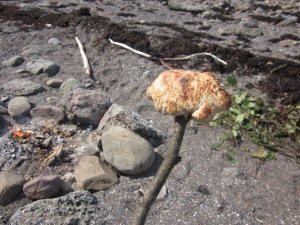 Here’s the recipe I used:

Mix together dry ingredients. Cut in butter. Add egg and sufficient water (1/4 – 1/2 c) to make a firm dough. Turn onto floured board and lightly knead.

If you would rather bake it in the oven at home, place the dough in a lightly buttered 8″ or 9″ round pan. Bake at 375F for 20 minutes. Cut into wedges to serve.

I love a good baking project, especially if it's for someone else (although I enjoy eating them too!); mostly for family and friends right now, but hoping to expand to a wider market someday. View all posts by sweetleafsusie

2 thoughts on “Bannock on an Open Fire”

Sharing thoughts on baking related experiences. See the top menu for galleries of my baking endeavours.