I love trying and sharing recipes, but I also want to use this space to write about experiences. A couple months ago I went to a local chocolate festival with my family. There were several local artisans, chefs and caterers who created chocolate sensations, and vied for the people’s choice award. We paid a $10 entrance fee and got to have a free sample from each participant (most were very generous in their samples) and then we could vote on which was our favourite. It wasn’t an easy task, and we had quite a sugar rush by the end! 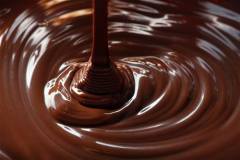 A couple samples didn’t go over well with me. There was a tiramisu with passion fruit sauce, which sounds good, but I found the cake had a metallic and oily taste to it and was not very enjoyable. Another flop was the brownie with pretzel embedded in it, topped with strawberry cheesecake and caramel sauce. I understand what the chef was trying to do by using contrasting flavours and textures, but there was just too much happening with it, and it was also messy to eat.

Some mid-range choices for me were the funky truffle, a dark chocolate truffle coated in crushed potato chips – another flavor-texture endeavour – and the habanero pepper brownie. They were mid-range because although the truffle was good, the chips had lost their crunch from being on the chocolate, so they ended up being more chewy than crunchy, and therefore the desired contrast was lost. The spicy brownie was good, very moist and chocolaty with the heat hitting you right at the end, which was nice, but fairly common these days.

One of the most unique was a small strip of apple-smoked bacon sprinkled with black pepper and drizzled with dark chocolate. It was a tasty combination, but I couldn’t decide when one would eat it. It seemed too sweet for an appetizer, but too much bacon for a dessert; maybe as an hors d’oeuvre at a party.

But my choice for the best was the chocolate peanut butter bombe. I know, it’s such a cliché combination, but there’s a reason it continues to be a favourite. A centre of peanut butter, surrounded by a mousse-like chocolate; a nice compliment of salty-sweet taste and thick-smooth textures. And unlike the equally common and tempting combination of hot peppers and chocolate, these bombs had quite a bit more effort put into their construction than the brownies, which helped them stand out more in my mind.

Unfortunately we weren’t able to stay until the end, so we don’t know who actually won the people’s choice award, but we definitely enjoyed our chocolate overload and look forward to any other delectable events that come along!

I love a good baking project, especially if it's for someone else (although I enjoy eating them too!); mostly for family and friends right now, but hoping to expand to a wider market someday. View all posts by sweetleafsusie

Sharing thoughts on baking related experiences. See the top menu for galleries of my baking endeavours.